How Leaders Can Benefit From Their Mistakes

Face it. Sometimes things go wrong, even if you are a conscientious, competent leader.  A blog post by Art Petty on how leaders can benefit from their mistakes resonated with me so much that I decided to share it with you, especially since many of my bosses over the years counseled me not to ever apologize or explain, as doing so shows weakness.

That did not appear to be good advice. What I found instead was that when I quickly owned up to an issue, shared what happened and how to fix it, my associates were appreciative and understanding.  This practice actually built trust, strengthened my working relationships and encouraged openness. By modeling that mistakes are not the end of the world, it allowed others the freedom to address issues openly when they arose. Petty’s post captures this notion beautifully when he writes, “don’t dwell on or attempt to hide your mistakes.  Instead, confront them head-on, help everyone learn from them, and move on.”

According to Petty, not only should you clearly admit that you made a mistake, in addition, don’t make up an excuse.  He also states that you shouldn’t blame anyone else on your team when an error happens on your watch: “Take your medicine and use your team member’s mistake as a developmental opportunity.”

Here are the two additional recommendations from the post that I support wholeheartedly:

“Share where you went wrong. If your gaffe was an interpersonal one, admit to the other party that you recognize what you did wrong. For example, “I shouldn’t have jumped to a conclusion before I heard all of the facts.”  If the mistake related to a decision, assess where you might have gone wrong and share the mistake. “I framed this problem wrong. I let emotions get in the way of a clear view to the situation, and I made a rash decision.”  This is powerful credibility building juice and a teaching moment for everyone involved.”

“Apologize. The fine art of the workplace apology is often ignored in the workplace. Instead of a sign of weakness, it’s a sign of character and strength.”

I love that.  As I mentioned, I didn’t often hear this perspective articulated in the business world, and I surely appreciate hearing it now. Thanks Art!

Saying thank you – and acknow 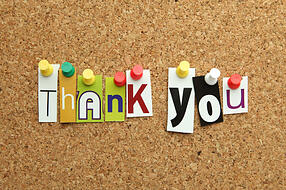 ledging someone in your workplace for a job well done or a meaningful contribution not only can make your workplace happier – it can improve retention and performance.

You and I don’t need to read all the polls and data to know that one of the top reasons people leave a job is because they don't feel appreciated.  Money is very important, but it only goes so far.  We all want to be recognized for the value that we contribute.  At work, a simple thank you and a show of appreciation can make all the difference.  Even Gallup, the research organization, has years of research that shows engaged employees are more productive employees.

Case in point: Doug Conant former CEO of Campbell Soup believes that giving a pat on the back is an essential part of successful leadership.  Over a ten-year period, he wrote approximately 30,000 thank you notes to employees.  Moreover, there’s proof that his attention to employee recognition as a tool for increasing engagement paid off.   After he took the helm at Campbell, his corporate culture-rebuilding program “The Campbell Promise: Campbell Valuing People.  And People Valuing Campbell,” resulted in double-digit increases for five consecutive years at a company that had previously lost half its market value.

If that isn’t sufficient evidence that gratitude has benefits in the workplace, consider the work of Robert Emmons,  psychologist and author.  He says that gratitude enhances our sense of self-worth, while at the same time strengthening social ties.  The best part, is that his studies show that expressing gratitude increases the not only the happiness of the receiver, but also of the giver!

With that, I just want to say, thanks for reading.  Wow, I feel better already! How about you?